On the eve of the opening of the Boat Show which launches the new nautical season, as is customary
Sanlorenzo held its press conference on the beach of the Hotel Majestic Barrière.


These are the only two recurring elements; for everything else, the 2022 conference will be
remembered as distinct from its predecessors, and this is apparent from the very title – Road to 2030 –
which immediately refers to a journey through this decade. A new vision, which the brand wished to
share with the press. 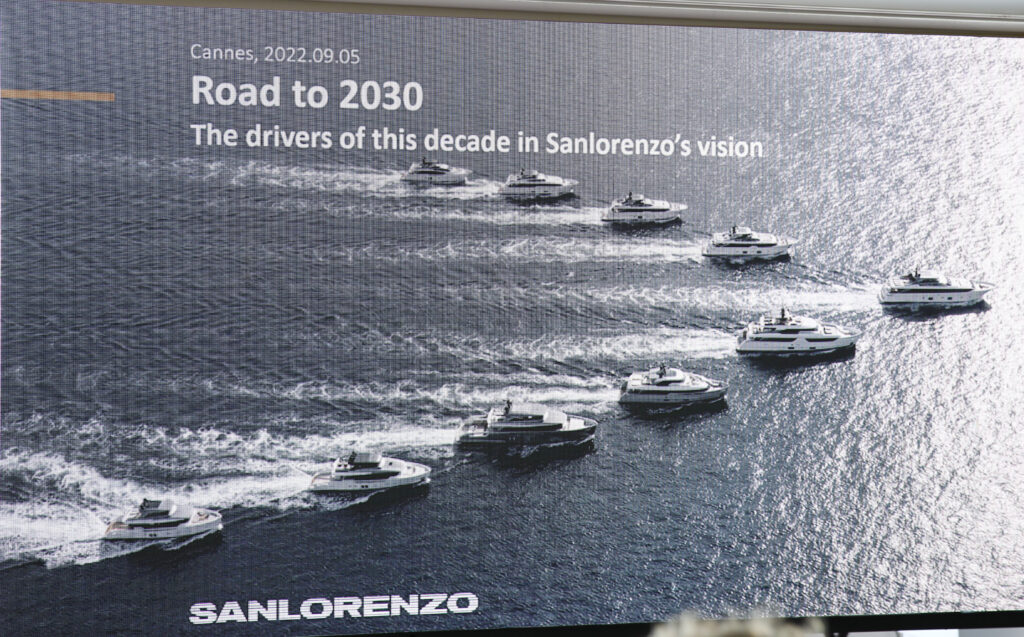 Far more, then, than the unveiling of the 2022 innovations of the Sanlorenzo and Bluegame brands –
the SP110, the SD90s, the BG54 – which, for a few hours during the evening, left the stand in the Vieux
Port to introduce themselves, accompanied by engaging music, to the guests gathered on the quay
of the Majestic. 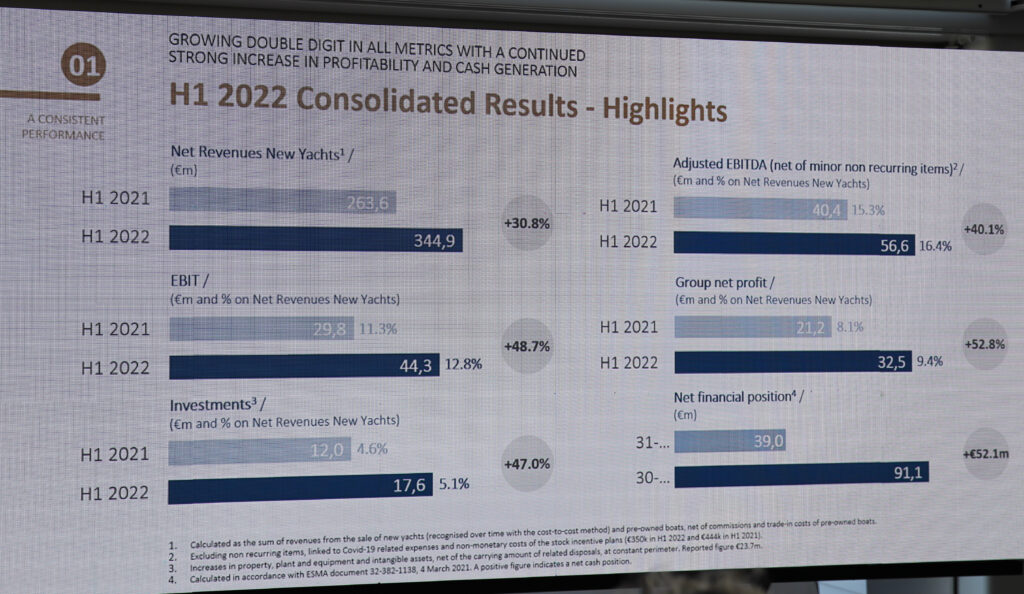 Vessels whose success has once again been heralded, because it is the result of a strategy that during
the last ten years has consolidated the positioning of what is now increasingly known as the Maison
Sanlorenzo: utmost attention to design, not only of the lines of the yachts, whose mastered evolution
has made them iconic, but also of the interiors. Sanlorenzo, first in the sector, has brought on board
prestigious collaborations with the most famous names in contemporary design, imprinting an epic
transformation in yacht interiors. 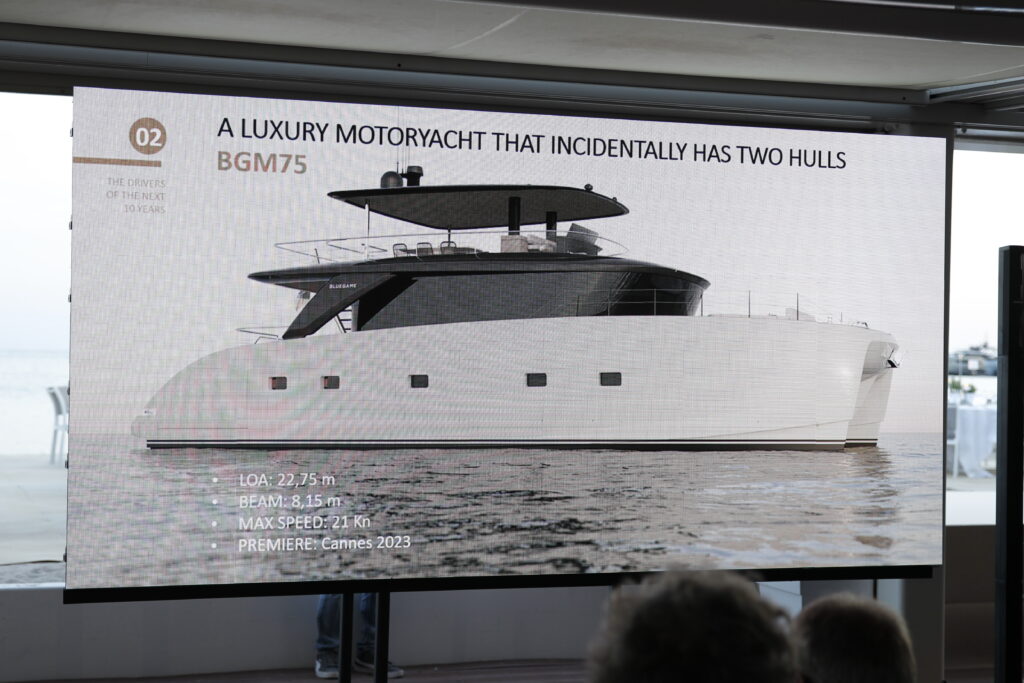 The step from design to art was almost ’natural‘ for Sanlorenzo, a route once again explored by the
pioneers in the yachting industry.
Founding pillar of the strategy defined almost ten years ago is innovation within tradition, with the
constant search for balance between the drive to introduce new ideas and consistency with the
brand’s history.

A balance that has always been successfully maintained. Countless are the
revolutionary innovations introduced by Sanlorenzo in the sector and now replicated by most
shipbuilders, such as the open terraces on the sides of the hulls or at the stern, first seen on the
Superyacht 40 Alloy launched back in 2007. Or more recently, the daring decision to forgo a lateral
walkway from stern to bow, in favour of greater internal volume and without any visual interruption
between interior and exterior. This was the birth of the Asymmetric line, first proposed on the SL106A,
whose immediate success led to its being extended to all the new models in the SL and SD ranges.
In the light of this insight, one can understand more clearly the reasons behind Sanlorenzo’s
uninterrupted growth performance over time, even in the years of the pandemic and socio-economic
instability, confirming the resilience of the Group’s Business Model.
An impressive track-record, indeed in rapid acceleration, was presented at the opening of the
conference, during which the figures for the 2022 half-year, approved by the Board of Directors a few
days ago, were shared. Excellent data, in particular regarding order intake, which exceeded the record
value of 1.4 billion euros, enabling the company to improve its forecast for the 2022 financial year:
revenues between 720 and 740 million, + 25% compared to 2021, EBITDA between 126 and 130
million, with an increase of +34%, net profit between 68 and 70 million, + 35%.
Strengthened by the leadership it has acquired thanks to this clear vision, Sanlorenzo has recently
enriched its strategy with additional guidelines: sustainability & technology, services and supply chain
are the essential themes on which it will focus its action in this decade, confirming its recognised
ability to be ahead of the times.

The introduction of innovations and technologies to reduce the environmental impact of yachts is
therefore at the heart of the activities of the Group’s Research and Development department, whose
high degree of expertise and experience has enabled it to sign strategic agreements with the world’s
largest players in power generation and energy management. Joint projects focus on the marine use
of hydrogen fuel cells, the real answer to the demand for sustainability in the yachting sector.
Starting with the exclusive agreement for yachts between 24 and 80 metres in length signed in 2021
with Siemens Energy for the integration of fuel cells powered by hydrogenobtained from methanol to
generate electricity on board, a technology that, first in the market, will see the light of day on a
50Steel superyacht scheduled for delivery in 2024.
This was recently joined in August 2022 by another very important exclusive agreement with RollsRoyce’s business unit Power Systems with its product and solution brand mtufor the installation of
hydrogen propulsion systems obtained from methanol. These solutions will be combined with fuel
cells supplied by Siemens Energy and will be installed initially on a prototype Sanlorenzosuperyacht,
scheduled for delivery in 2026.

The use of green methanol, produced with electricity from renewable sources and CO2 captured from
the atmosphere, enables the generation of “carbon-neutral” power: the amount of CO2 released into
the air in the combustion process is equivalent to the amount removed from the environment for the
production of methanol.

One can define as memorable the challenge won by Bluegame, which has been selected by American
Magic, challenger in the 2024 edition of the America’s Cup, as a partner for the design and
construction of the first „chase boat“ with exclusively hydrogen propulsion and use of foils , according
to the strict requirements of the event’s protocol. An extremely complex project, today the highest
possible expression of sustainable technology on board a vessel.

On the strength of this extraordinary achievement and as proof of its design capability in the use of
hydrogen in propulsion, Bluegame has also reached an agreement with Volvo Penta to install a pilot
IPS hybrid propulsion system, which will be combined with hydrogen fuel cells developed from the
America’s Cup project. It will be the BGM65HH (hydrogen-hybrid) model, to be launched in 2025, that
will accommodate this cutting-edge technology.

Countdown to ILTM Cannes, only a few weeks left until Showtime in Cannes

ILTM is counting down to its return on the Côte D’Azur, with just a few weeks until the international luxury travel industry meets in Cannes for the first time since 2019. ILTM Portfolio Director Alison […]

Le Negresco Hotel is delighted to announce: the official opening of its own private beach

Le Negresco creates a beach in two times. In 2022, it will be a “botanical garden by the sea” in the tradition of the Grand Siècle, the following year the architecture and landscape will be […]

Whether the South of France, Monaco, Switzerland, Italy or Germany: with us you can read news and stories from a colorful Europe.